What is a Yeast Beta Glucan? And How Does it Support Immunity?

When you’re considering ways to support your immune health, the options on the market are vast. From echinacea to zinc, the choices can be overwhelming—and often reflective of the latest trending health news. One trend—oat- and mushroom-derived beta glucans—has been associated with a myriad of health benefits, including lowering cholesterol and improving heart health—and in some cases, supporting immune system function. But only yeast-derived beta glucans (Saccharomyces cerevisiae) have been shown to have well-substantiated immune-supporting properties.

When it comes to beta glucans, the differences matter. Read on to learn more.

What are the differences between beta glucans?

Oats. Mushrooms. Yeast. It sounds like a grocery list for a trendy bistro. What all these ingredients have in common is that they are types of beta glucans. But the similarities end there. Not only are these three types different on a molecular level, but they have differing effects on the body as well. Although each of these types of beta glucans may provide health benefits, the benefits differ, depending on the type of beta glucan.

When evaluating a baker’s yeast beta glucan for its benefits, look for clinical research that supports the ingredient’s mechanism of action and provides data that demonstrates its safety and effectiveness. Research must be specific to that ingredient (or strain) and its process of extraction, because these attributes make a difference in effectiveness.

Get to know Wellmune®, a yeast beta glucan that supports immune system health. Watch the video to learn more. 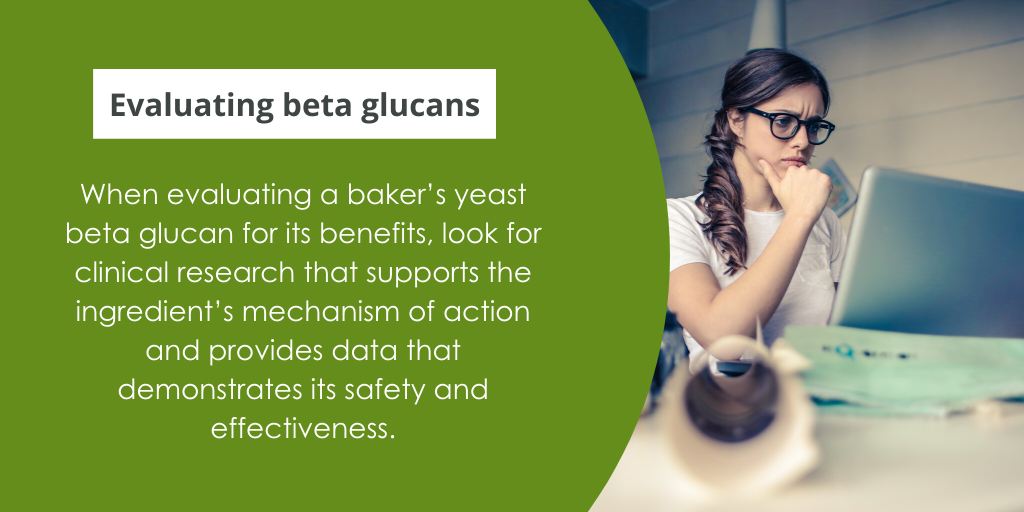 What makes a quality beta glucan?

How do you know that a yeast beta glucan ingredient is the best choice for supporting immune health? Basically, it comes down to three factors: how it works, how it’s made, and standardization.

Wellmune is a natural yeast beta glucan used by food, beverage and supplement brands to create products with immune health benefits for people of all ages. Using a proprietary process, Wellmune is extracted from the cell wall of a proprietary strain of baker’s yeast.

Wellmune can help support immune system functioning with research-backed benefits. Watch the video to learn how it works.

Wellmune works by supporting the action of innate immune cells. Innate immune cells recognize foreign substances like viruses, and prime these cells to fight an infection or inflammation. The overall effect is to “prime” the immune system to act more efficiently, rather than “boost” it.

Wellmune is supported by biomarker, mechanism-of-action, and over a dozen published, peer-reviewed human clinical research studies that demonstrate its ability to improve overall physical health, maintain healthy energy levels, and provide immune support for all ages and lifestyles:

Beta Glucan 101 What is an Immunomodulator, and How Does it Help Support Immunity?
Immune Health 101 Boosting vs. Supporting Your Immune System. What’s the Difference?
Healthy Lifestyles Things You Can Do to Support Your Immune Health

Connect the dots between
your product & immune health.